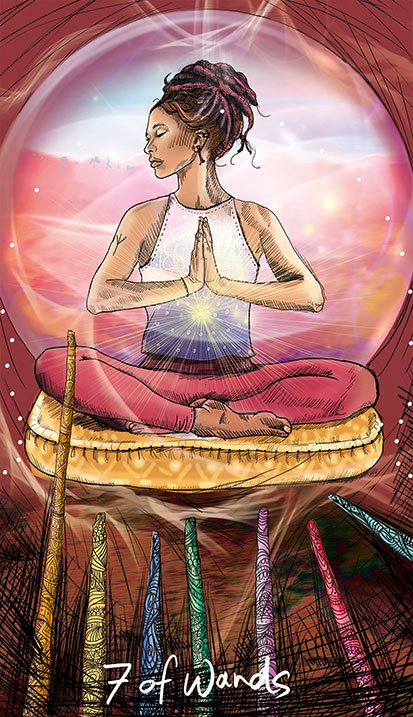 Shadow Seer (Reversed): defending yourself, being attacked, being misunderstood, a need to erect energetic boundaries, grounding and protecting yourself, slander

Haters. They only emerged after she made it to her current perch, and as soon as she did they started whipping out their wands and challenging her position. She’s been here for like, what, 5 minutes (?!) and there’s already someone who didn’t like what she had to say, another someone who disliked what she had to eat, someone else who aggressively asked her to explain her background, and a whole whack of wands pointing at her flaws. Some dislike anyone who is ‘successful.’ Some want what she has. Some are just angry at the world and they attack her because she is visible. She takes a pause, and remembers that she has the experience to be at the top of this ledge, and that she is deserving of this success. She realizes that her only option is to defend herself if she wants to stay put. While they use violence and aggression to tempt her into losing her composure, she chooses a different route and draws on her integrity, her energy and her love. This too, is a lesson that will serve her well. Taking a deep breath in, she draws down light from the Universe, and she forms an energetic bubble around herself. She casts a protective shield as she imagines the rune of protection streaming down into her sheltering sphere. Consciously, mindfully, she brings feelings of peace and well-being into her body. And so it is. 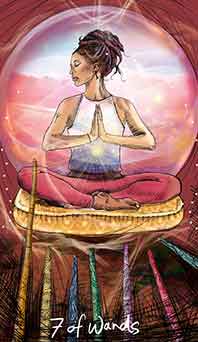 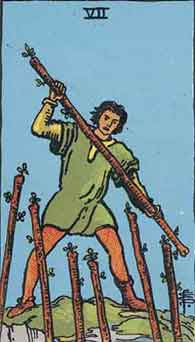 MESSAGE FROM THE 7 OF WANDS

It’s time to show your determination and tenacity, especially if you are being asked to defend your accomplishments to others. Remain confident in your abilities and remember that you deserve this success! You’ve earned it. Draw on your integrity, your love and your positive energy, and stand up for your beliefs and intentions. Stay synchronized with your bright vision, and avoid sinking into any low-vibe, negative states that others may be pushing. This card can represent the competition that emerges as a result of shining brightly in the world. Maybe you are at a place where others envy your status and they are hoping to knock you off your pedestal. If you are feeling attacked after sharing your magic (or after sharing a brave idea!) it’s important to remember that you don’t have to accept the opinions of others as truth, especially when they are vying for your position. Just do you. Check in with your integrity to make sure you are acting in a way that is aligned with your highest truth, and when you know you are, don’t let anyone stop you! Have persistence and defend what’s yours. If you are feeling criticized or unaccepted, this card is a reminder that standing up for yourself and clearly radiating your truest message will convey self confidence and backbone. Continue courageously, maintain your flow, create healthy boundaries, and bolster your mindset and your badass belief.

QUESTIONS FOR THE SEER

• What relationship do you have with the opinions of others?
• Is it time to be firmer with your energetic boundaries?
• How would your perspective change if you were on their side of the situation?
• What does it look like when you show up in the most vibrant form of you?