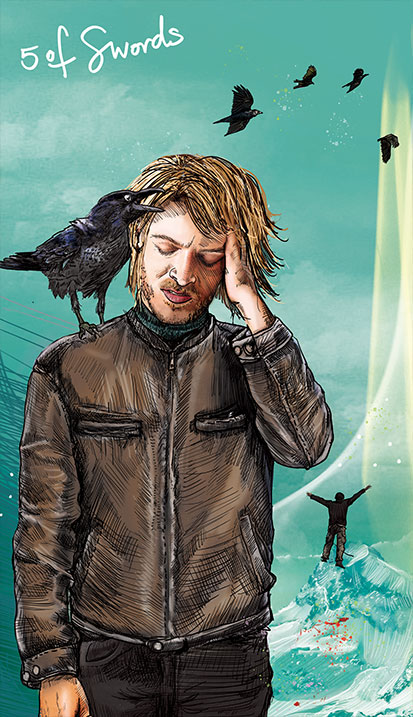 Light Seer (Upright): conflict, losing a challenge, unfair advantage, experiencing loss, the opportunity to build your skills and your confidence

Shadow Seer (Reversed): taking unfair advantage of a situation, winning at all costs, deceitful strategies and feeling guilty about your victory, psychic attack

He shakes his head – and tries to get his bearings. ‘How did that happen?’ He was outsmarted and out-jousted, and totally overpowered. He lost 4 of his birds in the chaos, and nothing seems fair about his situation. He was promised a fair fight, but certainly wasn’t given one. The outcome was determined the moment he agreed to this – because it was rigged, unfair and he was never strong enough to overcome this adversary. He watches his opponent celebrate his advantage, and his win. Even through loss, his loyal crow… his favourite…. remains. The bird waits for a moment and then whispers, ‘You came with your integrity and you left with it. You did your best. You still have the higher ground on this higher road.’ He looks back, knowing he will recover, and realizes he has learned more than he has lost. He lost, only to win the most important things: pride in his values and in his actions, clarity around what’s needed to succeed, and an understanding of the type of person he is, and is not. 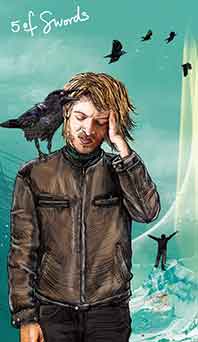 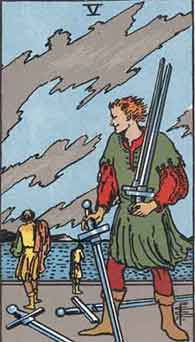 MESSAGE FROM THE 5 OF SWORDS

You may have experienced a failure, or lost a battle that you has left you a little bit sore. Sometimes life isn’t just, and unfair circumstances or unexpected losses can drain our energy for much longer than they need to. Often, it’s the fear of failure alone that does most of the draining. If you have had an experience that has left you feeling out-witted or out-played, put things into perspective and remember that this one chapter of your story doesn’t define you. Wins and losses are a part of the human experience, and the keys to self-improvement spring open when we are faced with our own shortcomings. Boost your consciousness, upgrade your skills and build on this experience. Carefully consider where you place your trust and your confidence next time, and study the playing field to find your success. In shadow, we learn that winning isn’t everything. The obsessive desire to win can have us stopping at nothing to feel victorious, and in the long run we can risk everything we’ve built along the way. You may find yourself a few steps backwards after winning if you are not bringing your integrity to the games. If someone else’s negative energy has got you down, send them some fierce love and move on with your day. Don’t let them derail you. Stay true to your heart and what you know to be right. Live and learn, lovely seer!

QUESTIONS FOR THE SEER

• Have you won your spot fairly? Justly? Honourably?
• What steps are you taking to right any injustices in the world? How can you help the disadvantaged or the underprivileged? Put another way… what has your
advantage or your privilege gifted you, and how can you spread the love?
• If you were wronged or defeated by someone, what lessons did you take away that made you stronger? Did you use the loss as a powerful instigator of your magic?
• In adversity, integrity and grit are beautiful allies. How do they support you in times of difficulty? How could you lean on them a little bit more?